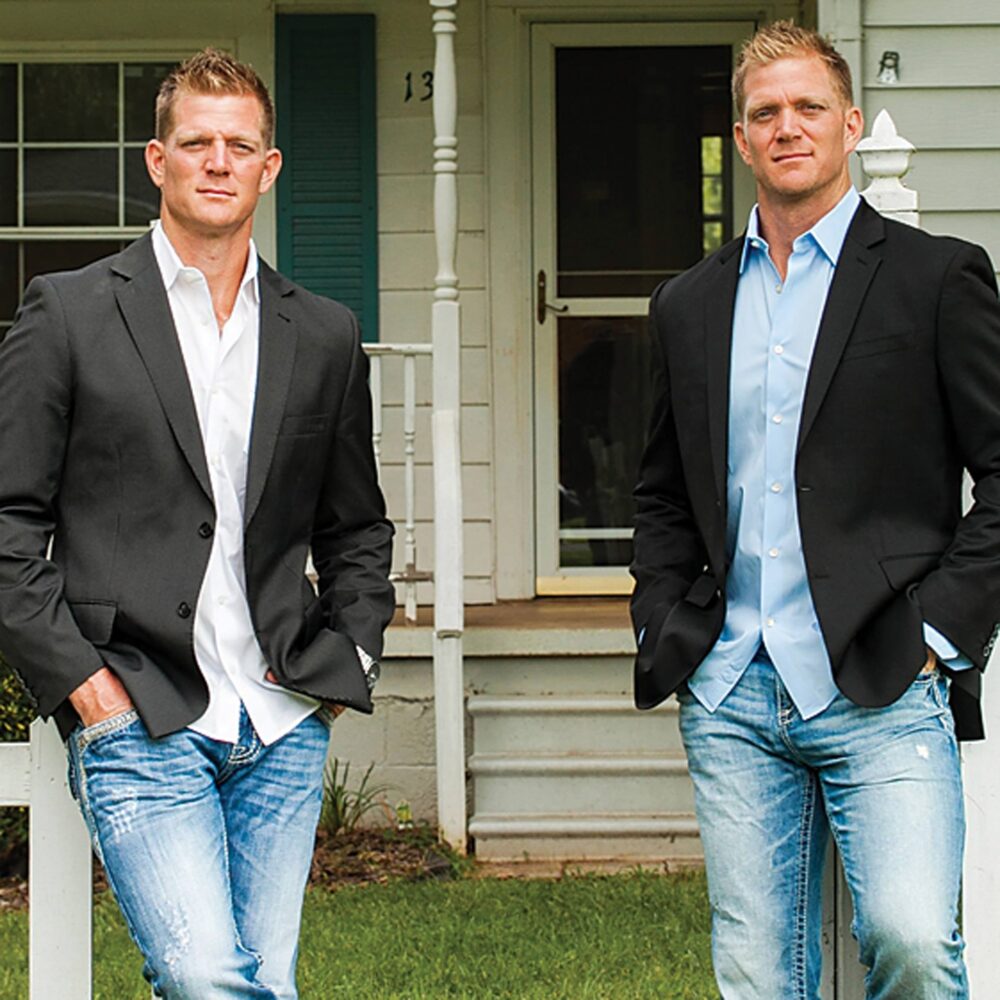 Instead, their faith let them see it as another open door. There’s a principle the Benham brothers, twins David and Jason, learned as young baseball players: Run through first base.

Sometimes in a baseball game, when it looks like a hitter is sure to be thrown out at first base, the player doesn't give up. No matter how unlikely it seems, the player runs as fast and hard as possible, hoping to beat the throw to first base. Usually the ball gets there first. All the hitter can do is slow down as he runs by the base with the umpire bellowing, “You’re out!” The player has run through first base.

The Benham brothers’ dad taught them to always run through first base not only in baseball but in life. The principle is seen in Scripture: “Whatever your hand finds to do, do it with all your might” Ecclesiastes 9:10.

This principle carried the Benham brothers not just through Little League, but also through professional baseball. It’s a principle that saw them through a national controversy in 2014 when their hopes of hosting an HGTV show were dashed and they found themselves in the eye of a national storm.

To understand what happened, you first need to know more about these men, who are husbands, fathers, business partners and committed lifelong Christians.

David and Jason grew up in Dallas, Texas, where their dad, Philip “Flip” Benham, pastored a Free Methodist Church. No stranger to controversy himself, Philip later lost that church because of his anti-abortion activism, Jason says.

“A lot of what you’ve heard from me and David comes from the upbringing that we’ve had from our parents,” he says.

The brothers attended Liberty University in Lynchburg, Virginia, and both were on the baseball team. After graduating in 1998, both were drafted by Major League Baseball (MLB) teams and both ended up with the St. Louis Cardinals. In 2002, an injury forced Jason out of the sport and David retired shortly after that.

In 2003, they started Benham Real Estate Group, selling foreclosed homes for banks and government-sponsored enterprises. They earned real estate licenses in order to save money on homes of their own. Since then, they franchised that first business and started a total of 14 businesses, including six nonprofits.

The brothers are inseparable. David is married to Lori and Jason is married to Tori. Together, the two families have nine children and live on the same street in Charlotte, North Carolina. The families work together, play together and attend church together. The kids are homeschooled.

Business took a turn in late 2012 when a video production company approached the brothers about starring in a reality TV show. Episodes would feature the brothers helping families buy fixer-upper homes to update and remodel to sell for a profit. The show would be called Flip It Forward, and the two handsome, personable guys seemed a perfect match for TV.

But hot-button politics swept up the Benhams in controversy before the show’s premiere. It started during the 2012 Democratic National Convention, which was held in Charlotte. At the same time, about 9,000 Christians—including the brothers—and lots of news media gathered at a solemn assembly called Charlotte714, Jason says. Some controversial issues were discussed and prayed about at the gathering, and the Benhams landed on the radar of homosexual advocacy groups.

When HGTV announced that the brothers’ house-flipping show would debut in spring 2014, the advocacy groups protested. A website called Right Wing Watch published a post calling David an anti-gay, anti-choice extremist and quoted remarks he made during a radio program about “homosexuality and its agenda that is attacking the nation.”

“They basically just lied about us—took some things we said, things we didn’t say, things other people said and attributed them all to us. And HGTV caved to the pressure,” Jason says.

In the midst of an Internet firestorm, the TV network canceled Flip It Forward on May 7, 2014, before a single episode ran. A USA Today headline read, “The Benham Brothers: If Faith Costs Us TV Show, So Be It.”

David says, “When the cameras left and everything stopped, we knew we had to run through first base.”

The Benhams aren’t the only ones getting caught up in national media storms. New victims are dissected daily; reputations are torn to tatters by easy slams posted as tweets, blogs and blog comments. Common targets include celebrities, politicians and conservative Christians, who have been declared out of step with the culture. Anonymous posters make many of the attacks seeking to silence and publicly shame those they oppose.

But there’s a difference with the Benham brothers: They are not ashamed and they won’t retreat in silence.

The network dropped the show. Its only public comment was a tweet posted on May 7, 2014: “HGTV has decided not to move forward with the Benham Brothers’ series.”

The brothers released a statement on their website that said their businesses did not discriminate against people who didn’t share their views. “Anyone who suggests that we hate homosexuals or people of other faiths is either misinformed or lying,” they wrote.

More than 19 million users tweeted about the Benham brothers between May 6 and May 28, 2014, according to a report by their media team. “We were able to put it in neutral and back out and watch everybody engage. It was overwhelming to see how many people were for us,” David says.

But it wasn’t always easy. In private moments early on, it seemed fear would overtake them, that they’d feel shame for what they had said or what they believed.

In their book, Whatever the Cost: Facing Your Fears, Dying to Your Dreams, and Living Powerfully, David wrote that after one meeting with HGTV, he deleted some of his tweets that he thought could be misinterpreted. He asked the Web developer to take down the Charlotte714 website and several ministry friends to take down his blog posts and videos.

But doubt was fleeting and they quickly shook off fear of shame. “It charged us up. It felt like somebody dumped nitro fuel into our tanks. We were like, ‘Let’s go. Let’s do this.’ And only the Holy Spirit can do that,” Jason says.

Jason knew this because the brothers had been reading the Bible since they were young. Its truths came to life for them in Jesus’ words: “Blessed are you when people insult you, persecute you and falsely say all kinds of evil against you because of me” Matthew 5:1. Similar verses also empowered them to respond not naturally, but supernaturally.

Another principle learned from baseball also sustained them.

Their MLB experience taught them to die to their dreams, to hold them in an open hand and leave the results to God, David says.

“If you leave the results to God but pursue it with your feet, if you don’t make it, you’re not going to keel over with bitterness and resentment,” he says. “You’re just going to keep strong and catch the next thing that hits your hand and go for it.

So they let go of Flip It Forward and caught the next thing that hit their hand: Whatever the Cost, published by Thomas Nelson in February. Invitations to speak to churches and Christian groups flooded in from all over the country.

And they ran through first base. They finished flipping the homes they had started for the series at no charge to the families. And they insisted to CNN afterward they had nothing but respect for HGTV, crediting the network with upholding its commitments to those families.

“We really believe God has called us into this,” Jason says. “This time last year we were filming a show about real estate, and this time this year we’re accepting invitations to go and speak all over the country about religious freedom, standing boldly for your faith, and discipling people. Everything is different now, but we’d rather be on this side.”

In Whatever the Cost: Facing Your Fears, Dying to Your Dreams, and Living Powerfully, David and Jason Benham list 10 action points to help readers prepare for life’s spiritual battles. Here are a few of those points.

The Benham brothers weren’t surprised when they were falsely accused of things they hadn’t said. They were prepared. It brought to mind all those Scriptures they had read since they were young, verses like Matthew 5:11 and Psalm 56:5.

As those verses indicate, people reviled Jesus and twisted the words of King David, so they’re going to abuse today’s Christians, too, David says.

Not long after the book was released, a Fox News personality asked the brothers when they were going into ministry. David responded that they already were ministers in the same way a stay-at-home mom or an architect or a janitor who knows Jesus is a minister of the Gospel.

“You are a minister right where you are. Your pulpit may look different, but it's not about position. It’s about passion,” he says.

HEAD FOR THE GATES.

“Go to the gates of your city and stand for Jesus,” the Benham brothers wrote.

The brothers are careful to draw a line between persecution and pressure—pressure canceled their HGTV show, according to David. But pressure can become persecution if Christians don’t stand up.

“We have to be outspoken about things,” he says. “It’s the truth that will set people free. If we remain silent, well, then we don’t expose the darkness. When the darkness is exposed, that’s when the light can shine the brightest.”

Like the apostle Peter, David admits the brothers’ faiths have wavered at times throughout their lives, but God has never wavered.

Ask God for forgiveness and to fill you with the Holy Spirit. Commit to living for Him.

“Over time you begin to get really strong,” David says. “We like to say the secret to bravery, the secret to courage, is to first recognize your cowardice and then to allow the Holy Spirit to unleash your inner lion.”