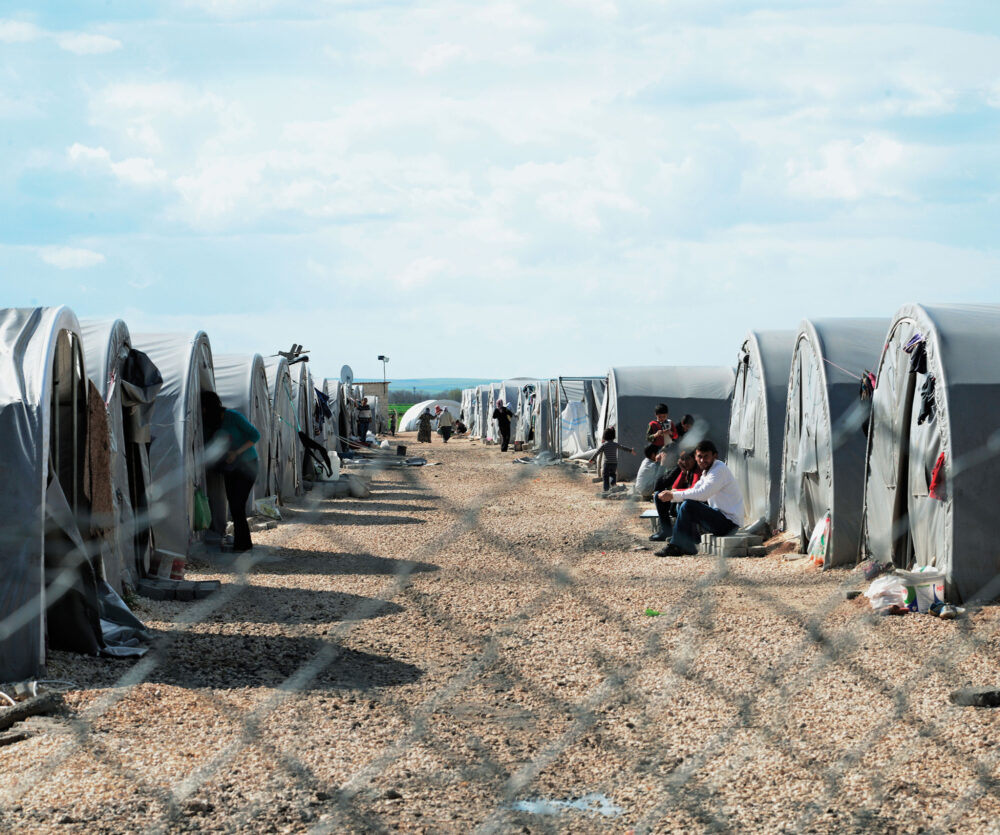 Home to more than 84,000 Kurdish refugees in the northern part of Iraq, Domiz Camp is filled with people who have lost everything and are seeking shelter from the Syrian civil war and terrorists. Many have been here for years. It’s ground zero for LaDawna’s new ministry with handicapped children.

A 33-year-old single woman from Fresno, California, LaDawna had long dreamed of missionary work. But she never considered the Middle East until several years ago, when Jack Harris, director of Hands of Hope Foundation International (HOHFI), spoke at the Praise Chapel church copastored by LaDawna’s parents. “Jack shared about his work in Kurdistan and, from the moment he began sharing, my whole heart was just overwhelmed. I was completely captivated by their story,” she says.

A short time later, while watching a TV news segment about Iraq, she heard an audible voice. “God said, ‘That is where you are supposed to go.’” Freaked out, but certain of what she heard, LaDawna went to bed without telling anyone. That night, she had a dream. She was standing on top of a mountain with her hands outstretched over a valley. “When I woke up somehow I knew that was Kurdistan.” Before long, LaDawna was consumed by a desire to minister to the Kurdish people.

After LaDawna told her parents, they wanted to dissuade her. Pastors Willy and Diana McKinnis had been to Iraq, had seen the turmoil, suffering and persecution of Christians. Surely, if their daughter understood what it was like, she would rethink her admittedly vague plans. “We thought if we told the worst of the worst, she would change her mind. But it made her more determined to go. Knowing the pain these Kurds were in, she wanted to help in any way the Lord led,” Diana says.

Willy and Diana offered wise counsel. They encouraged LaDawna to travel to Iraqi Kurdistan in 2012 before making a full commitment to her missionary plan. In this way, she could ensure it was the Lord, not emotion, drawing her there. She found a job teaching English to Kurdish children.

With the help of her interpreter Gulay, a Syrian Kurdish refugee herself, LaDawna began to earn the trust of her students, their parents and Iraqi security and government officials. But she knew the fulfilling of God’s calling had not yet come, and she asked God to show her the direction He wanted her to go.

About the same time, Domiz Refugee Camp was becoming overwhelmed with people escaping Syria’s deadly civil war. HOHFI had been accredited to work with refugees by the United Nations, and Jack got a call in late 2014. “The camp’s director asked if we could develop a project to help the marginalized special needs children who've accompanied their families fleeing Syria. I recommended LaDawna, and I’ve not regretted that choice.”

After returning home to raise money, LaDawna arrived at Domiz Camp in March of this year. Every day she sees lush mountains in the distance—much like in her dream.

Jack is awed by the work she is doing. “LaDawna runs a rescue shop for handicapped children within a yard of hell,” he says.

Hidden throughout the sprawling camp are multitudes of children, who have been severely handicapped as a result of marriage and reproduction within families. First cousins and even siblings marry, so one in four couples has a chance of bearing a disabled child. “They don’t understand genetics,” LaDawna says.

Many Muslims believe that a handicapped child is a divine curse for something hidden in a parent’s past. Parents feel ashamed and hide the child away so no one sees or touches him or her.

Because she is creating a ministry where none exists, LaDawna’s first task, in keeping with U.N. rules, is registering as many families and children as possible to receive her services. Soon, she’ll work with the children, teaching them how to walk, use a toilet, feed themselves, bathe and talk.

Most days, LaDawna focuses on people and their overwhelming needs. But, every once in a while, she faces the reality that danger lurks on every side.

One day, she was registering a wave of 15,000 refugees coming into camp when, 40 feet away, she witnessed Peshmerga, the Kurdish military force, lining up 120 men at gunpoint. “I asked one of them, ‘What’s going on over there?’ She told me they had captured ISIS terrorists.”

Five minutes later, Peshmerga took the terrorists to another location, and in the distance LaDawna heard gunfire. “That’s when I realized danger is so real and so close. From that moment on, I decided I needed to be more diligent and more careful of my safety.”

In order to protect herself, LaDawna never goes anywhere alone, she stays aware of her surroundings and constantly looks over her shoulder. If she’s not in the camp, she seeks refuge in her apartment in a nearby town. “At times it feels like my apartment becomes a prison because I don’t go anywhere by myself because it’s not safe. I stand out as if I have a target on my back: American, woman, alone.”

In moments of loneliness, LaDawna understands the true sacrifice of mission work.

“I use to think that it was easy for missionaries because God called them to it,” she says. “But it is so hard being away from my family and friends.”

LaDawna is confronted daily by what the U.N. has declared as the world’s largest humanitarian crisis since World War II. Overcrowding, not enough food and a lack of sanitation facilities is the daily reality facing families stuck in the refugee camp for years. As the sole missionary running a handicapped children’s project, LaDawna struggles with the limitations of working alone. “I wish I could do more for the people. I can sometimes hear children crying, and I know they are hungry or cold or sick. I can’t fix it and I struggle with that,” she says. But she does what she can—starting with sharing love with a nation of people who know little but poverty and war.

Living and working in a Muslim area under Iraqi law, it’s illegal for LaDawna to share her faith outright. “But,” she says, “they look at me and they see a God who speaks and works.”

She urges Christian to pray for the refugees huddled together for safety at Domiz Camp. “We need people on their knees praying for this country—so it can stay safe, so I can still be here and so others can come,” she says. LaDawna tries to offer the people hope, love and true freedom in Jesus Christ. “I hope and pray that God will continue to bless this ministry and that the blessings will overflow.”