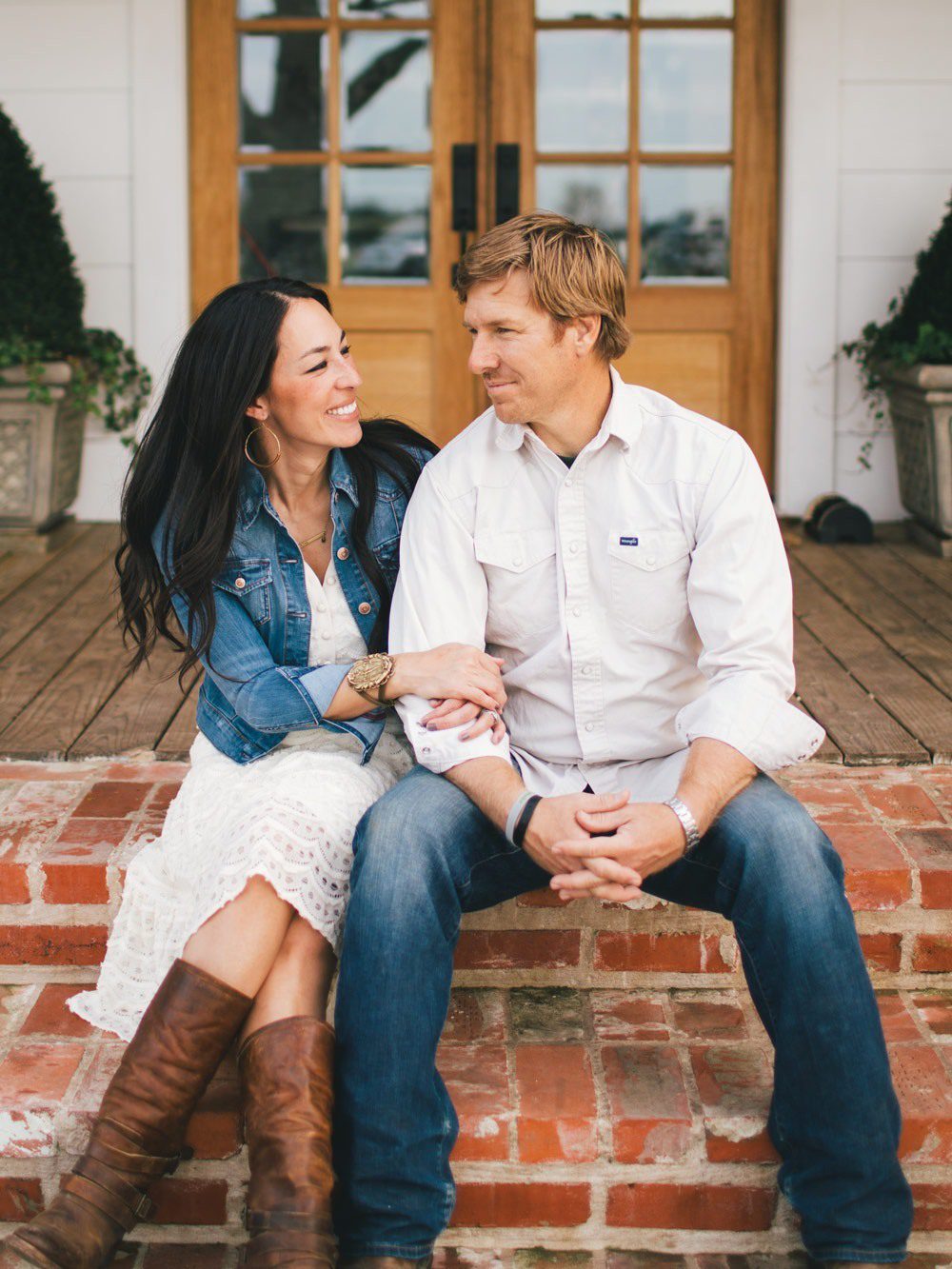 As is true of all pioneers, Chip and Joanna Gaines are good with hard work. Within three months of being married in May 2003, they opened a store and bought their first house to flip. Since then, they’ve expanded their businesses and family. With their optimism and rugged individualism, they see potential where others fear impossible odds. They gracefully mesh work and home, so their kids, Drake (9), Ella (7), Duke (6), and Emmie Kay (4), get plenty of hugs and life lessons.

Though both graduated from Baylor University in Waco, Texas, they didn’t meet there. After finishing school, Chip started a landscaping business and Joanna landed a New York broadcast journalism internship. After her return home, the couple met when Chip stopped at her father’s tire store for brakes. The two talked and the next day he asked her out. “It was a match made in heaven,” says Chip.

Joanna had grown up in church but she was on her own when she developed a personal relationship with God. She learned as an adult to rely on Him, rather than her parents, to determine if something was right or wrong. She says, “At that point, it was less about rules and expectations, and more about walking fully with who God has created me to be.”

“I wanted to do broadcast news and I was dealing with really missing home and family, but feeling like God was getting me away to develop a sense of who I was. In that place He said, ‘You’re going to have a ministry toward women.’ I didn’t know what that meant at the time … but He put a dream on my heart for women’s hearts.”

Chip grew up in the Dallas-Fort Worth suburbs. Like Joanna, he had been raised by parents who had come to know and commit themselves to Christ as adults. He spent summers in Wichita Falls, Texas, on his granddad’s farm where, as he puts it, “farm and ranch work got into my blood.” He tells how he loved hard work but hated school. His mom convinced him to stick out getting his college degree, but it was tough. “I’d look out the window and watch these lawn maintenance guys mowing the grass at Baylor University and I’d be so envious,” he says. After college a lawn-mowing business grew into landscaping businesses, but he had bigger goals—maybe even to own a ranch.

Joanna, describing herself as shy and awkward in early adulthood, was unsure of her future. “I was basically trying to decide—literally the week that I met Chip—if I wanted to go back to New York and pursue something in broadcast journalism.” Chip says, “I saw this beautiful girl and I was drawn to her immediately.” He wasn’t timid about asking for a date. “Hey, if you’re gonna do it, get it out there,” he says.

They were married in 2003. “We both had real entrepreneurial desires,” says Chip. “We kind of bounced ideas off one another.” They opened Magnolia Homes, a boutique for home goods and, at the same time, they developed properties in the Baylor area. When the real estate market dropped off, they decided to take advantage of Joanna’s growing popularity as a local designer. “JoJo had such a following from her design elements that we started implementing some of those creative ideas into the construction of our properties. That’s when it really took off,” says Chip.

Chip says, “We were built for this. Our parents pushed their whole lives to create an opportunity for my wife and me to be successful from a financial standpoint, but more importantly, they wanted us to follow Jesus. We were taught to do that and now that we’re in it, life’s complicated, people get hurt, businesses go bankrupt, and yet we just feel like warriors to some extent because we were trained to do this …We know with a 100 percent certainty that whether TV continues to be our future or whether this fizzles out in six months ... God will be with us, teach us and prepare us for whatever new adventures He has planned for us.”

Joanna says, “Our lives have always been pretty spontaneous and somewhat crazy because Chip and I like to go on a lot of adventures. We typically don’t say no to something. Chip’s whole deal is ‘Hey, if it’s presented to us, we’ll think about it. We can always grow in capacity.’ ”

Life for Joanna is about walking with God. “He’s creative and He’s fun and He knows my desires and He knows my heart. Who would have known 10 years ago when I sat in a New York apartment and dreamed about something like this that He heard me—and now, 10, 15 years later, He’s put this in our lap. He’s a creative God, and He made it happen.”

Still, like all moms, she struggles with practical things, like making time for the kids and juggling daily chores. Adapting to being on TV is also a challenge. “It’s been a new reality for us because we’re not used to this. How do I go shopping without being noticed?” Even stopping at a store to take a phone call invites a woman with questions to tap on the window of her truck. Joanna responds with grace and genuine interest, though she’s balancing several remodels and show tapings.

But the couple keeps it all in perspective, and they have some unbreakable rules that place God and family first. She says, “My heart is always drawn home.” When making decisions, her first thoughts are, “How will this affect my kids? And, in my absence, how will this job be covered, and covered well?

“At this place in our lives, we’re filming a show for HGTV and running my retail location, an online store and our remodeling business. There are a lot of facets to our lives.” Keeping centered is important. Joanna says, “I try to walk in peace. I don’t care what is around me, if my heart isn’t at peace, I don’t feel like I’m doing what I need to be doing.” Chip and Joanna still pray together, hold hands and eat dinner together every night with the kids.

There are weeks when Joanna feels super busy, of course, and her heart longs to have her kids nearby. So she looks for creative solutions to keep the family close. “For instance, this week I’ve just really missed the kids,” she says. “I called the sitter and said, ‘You know what? I’m gonna have the kids be near me all day.’ So this week my boys are working in the warehouse, shipping stuff, and they’re having a lot of fun because they are throwing peanuts at each other and they’re happy.”

One couple has seen firsthand the benefits of the show. Tim and Janice McCall, a Texas couple working with an orphanage called Restoration Gateway in Uganda, Africa, had a tiny home remodeled by the Gaineses for their visits to the U.S. The McCalls’ grown kids picked out the home, and many in the TV audience who watched the renovation reached out to bless the missionaries’ work.

“It’s not about Chip and Jo and all that we can do,” says Chip. “It’s really about God working in us and through us to bless other people.”
Photography by Megan Shipley, Rachel Whyte, HGTV and Molly Winn