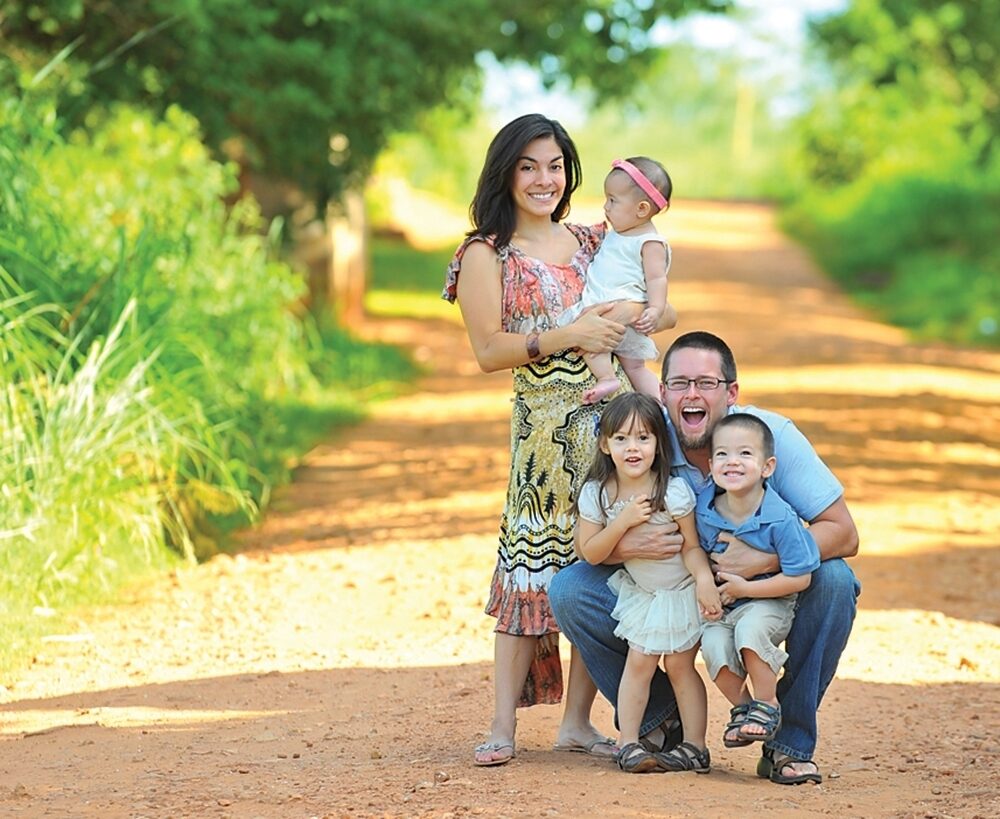 It was pouring rain two years ago when travel-weary Aby and Stephen Nelms and their small children began the final 45-minute stretch of an arduous journey from the United States to Zambia. They drove along red-mud roads that had become a nearly impassable gumbo during the wet “emerald” season, as locals call it. At last, they reached their first destination of Chongwe (pronounced chong-way).

The young missionary couple hadn’t expected much in such a poor Third World town, but the small steamy cabin where they were sheltered for the first three weeks tested their most pessimistic assumptions. With no electricity or running water and only an outdoor charcoal brazier for cooking, they found themselves challenged by the simplest tasks.

As the children of missionary pastors, both had grown up learning how to make do. Stephen had traveled to Zambia and other underdeveloped countries on missions several times, and Aby, born in Venezuela, had even more international mission experience. “None of it prepared me for scrubbing cloth diapers by hand and cooking every meal outdoors in a pot on hot coals,” Aby says.

They had come to start the work of Give Life, a fledgling Christ-centered humanitarian development organization that seeks to impact Zambians spiritually and in every aspect of life. The couple’s ministry operates under the governance of Gospelink, which was founded by Stephen’s parents to train national Christian pastors in their home countries.

“God put it in our hearts to come alongside those in need, to shine a light into the darkness,” says Stephen. “The Gospel is where it begins. It says we’ve been made into new creations to do new work. We seek to reconcile mankind to the ideal that God intended in the beginning.”

As Christians, both feel called to help improve the daily lives of those they encounter. “God doesn’t want His people to remain hopeless in this life, mired in grinding poverty with no vision for a better future,” says Stephen.

In the brief time they have lived in Zambia, most of their work has been done in the Chishiko village, which is about four miles from where they live. They have helped develop a school, Stephen has led worship and Aby has formed a women’s prayer group, which also includes time for cooking and crafts. Plans for a new community water well are in the works, too, along with other improvements.

It may be unsurprising that two children of the missionaries are surrendering their lives to this work, but it’s an unlikely story. While Aby has always felt the call, 10 years earlier no one, least of all Stephen, could have predicted he’d be here.

From Dropout to Stock Broker

“I was a rebellious teen,” Stephen says. “A preacher’s kid, I couldn’t wait to leave all the God stuff behind.” At college he fell in with the hard partiers and dropped out. Then he went to Colorado to work on the slopes, drink and get high. “I was in a lifestyle of total depravity,” he says.

In 1998, at age 20, he made his way to New York. With a reference from a family friend, he landed a job in a Wall Street firm. A year later, after passing rigorous exams, he became a licensed New York Stock Exchange broker. “I began to build a group of clients and was having financial success, but I was living in desperation, enslaved to my sins. I started to question whether I could ever find God again.”

Then came 9/11. Stephen’s office faced the twin towers of the World Trade Center. “I worked on the nineteenth floor, and I saw people jumping out of windows. When the towers came down, I was only a few blocks away.”

That day was one more step in turning him back to God. Many circumstances were leading him to the Lord. But it proved to be difficult. For the next six months he held out, trying to bargain with God. By spring 2002 he could no longer ignore the call. To determine his next steps, Stephen went to Grace Fellowship Church in West Palm Beach, Florida, where an uncle was pastor. To pay his way, he worked as a janitor.

“One day I was working in my office on Wall Street and the next I was pushing a broom in a church basement,” he recalls. Soon after that, he earned a B.A. in ministry, then served as a pastor at Grace Fellowship.

While there, Stephen met Aby, a talented freelance photographer. “On our first date, we talked about missionary work and what God had put in our hearts to do,” she remembers. A year later they were married and then launched a church and started their family.

In 2010, with encouragement from their church and families, Aby and Stephen founded Give Life, seeded with their meager savings. As they looked across the world at where they might launch the ministry, they settled on Chongwe, Zambia, where Gospelink was building a Bible college. The country seemed particularly well suited because Zambia is one of the world’s poorest nations, it is peaceful, English-speaking and has a stable democratic government.

Viewed from halfway across the world, adapting to cultural differences seemed less imposing. Once in Zambia, however, where modern conveniences are not the norm, Aby and Stephen met several obstacles. It took months to arrange the simplest things. Moving to a new house, they found no water, no electricity and no way to cook. “In those early days, we had no furniture,” says Stephen. With the coolest place in the house being the hall, after cooking a meal in a makeshift kitchen, the young parents would sit on the hallway floor to feed young Josiah and Emma. “At that point, we were just trying to learn how to survive,” he says.

As foreigners, they attracted attention. “Every time we walked anywhere, people stared,” says Aby. “I would take out my camera and they would talk and talk and I would think they were offended. I asked what they were saying and they’d say in English, ‘It’s so nice that you are taking our pictures.’ ”

Two years on, the family of five—baby Joannah was born in July 2011—has settled in comfortably. They have a water well, which makes life with kids easier. Electric service is intermittent, so they have a tiny gas and electric stove. Internet availability has even become more reliable recently.

Once the family was settled, Stephen met with government officials to secure land for a center. The couple envisioned Give Life as a traditional Christian aid organization, planning to build in a central location and serve the community. But progress was slow and God had another plan.

A new direction began to unfold when Aby and Stephen, scouting for land with Chishiko leaders, were deeply moved by the needs they saw all around them. They recognized that:

Confronted with those realities, Aby and Stephen surveyed the possibilities. They asked to see the community school, one built four years earlier, that they had heard about. The mud-brick building, with a damaged thatched-grass roof, served 120 children who sat on a dirt floor, and were taught by two volunteers with no formal education. Immediately, Stephen and Aby saw a new plan: Develop the school as a local center.

“It was one of those God moments, when you just have the conviction that this is it,” says Stephen. “Here was a group of villagers who were already unified and willing to work in harmony toward a goal. It was a perfect environment to share our vision.”

The school, located on large, open land overlooking a seasonal stream, had plenty of room to grow. “I could see it as I stood there,” Stephen says. “The vision unfolding: the school, farms to feed the children, orchards, fish ponds, chicken houses, a community clinic, an adult center for training.”

Things fell in place quickly. The village pitched in. The government donated cement. Large and small teams of Christian volunteers have journeyed to Zambia to help.

Marti Skow and two fellow members of First Family Church of Ankeny, Iowa, traveled to Chishiko to lend a hand. Their congregation has committed financial support for digging a well near the school and installing a pressurized system to irrigate nearby vegetable gardens.

Marti says, “A quality I really appreciate about Stephen and Aby is their sense of wanting to help these people obtain a better standard of life for themselves.”

Last November, Proyecto América, a Latin American Christian aid organization, sent a team of 100 to help with school construction. Other teams helped in many ways.

In early 2012, the school opened. “It is a dream—a good dream,” says Emmanuel Chilayi, one of the committee members. “I didn’t think it was possible.” Stephen admitted there were times when he too had doubts.

“We took a step of faith and God did it! We began the year with nothing but our small means. We told the head man that there would be a building by the end of the year. The end of the year came and here is a school. We know it is only God.”

This year, Give Life is working with the village on a chicken house to generate income for the school and other projects.

Stephen says, “We came to Zambia because this is where we feel that God would have us create a model for Christian development that is both sustainable and reproducible.”

In Chishiko, hope is growing and lives are changing as the Nelms family builds a ministry.

Learn more about how you can help, visit givelifeproject.org.

Once she adapted to her new life in Africa, Aby Nelms began to enjoy the peaceful rhythms—learning to cook meals from scratch, joining the throng of Zambian women some afternoons at the open-air market, and most important, being a mother. “I support our mission work, but I’m a mom with two toddlers and one baby. Right now my family is my main ministry.”

Still, every Wednesday Aby meets under a mulberry tree in her village of Chishiko with a women’s group she started. Life for these villagers is harsh. Girls marry young, and polygamy, infidelity and family violence are common.

“A women’s co-op and prayer group was a completely new experience for them. It’s very formal. They wanted that. We have a president, a secretary and a treasurer. We bought matching chitenges [colorful pieces of cloth used for skirts, slings to carry babies and even as ground cloths]. They’re so proud to show that they are part of this group.”

At first, the 40 women shared very little about their lives as they worked on craft and cooking projects or participated in a Bible study. As the bonds of love and respect grew—Aby’s pregnancy helped that process along—the women began to share stories of sick children, husbands who ran off, hunger, grief and joy.

“These women,” says Aby, “I love them; they have initiative.” While she was away giving birth at a hospital in South Africa, the group took some of the money they’d made crocheting and bought plates in the market. They sold the plates for a profit and bought a large set of pots. With those pots, they can prepare enough food to feed 10 families.

Zambia, at a Glance