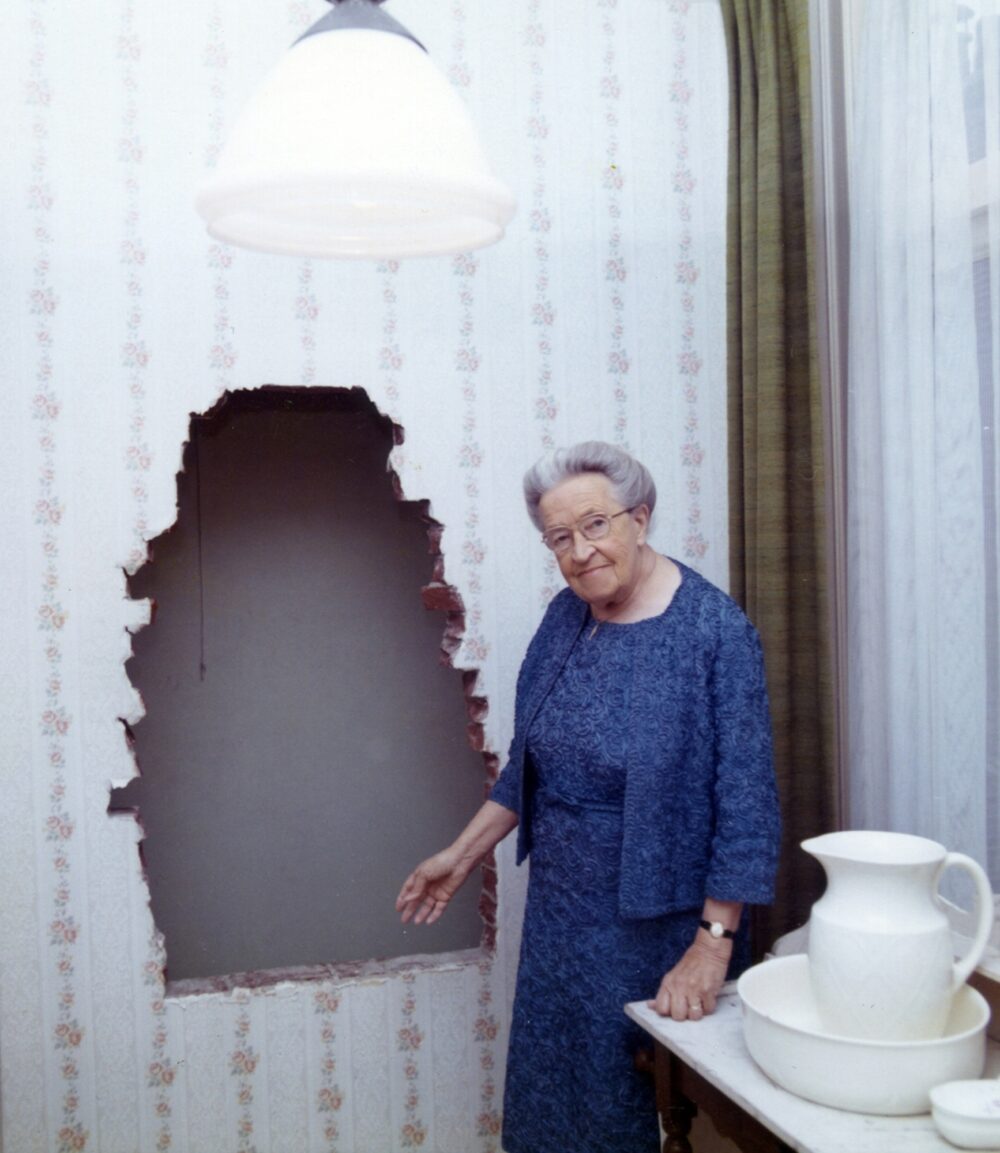 For many, the name Corrie ten Boom calls to mind a talkative elderly woman with an accent who always seemed to be going on about Jesus. That’s not wrong, but the description captures only a glimpse of her near the end of her life.

There was so much more to this brave servant of Christ. Billy Graham called her “one of the great Christian heroines of the [20th] century.”

“Forgiveness is an act of the will,” she said, “and the will can function regardless of the temperature of the heart.”

The part of Corrie’s story that captured the world’s attention starts at the outbreak of World War II. At that time, Corrie was a modest 50-year-old single woman living a peaceful and relatively uneventful life with her family above the ten Booms’ watch repair shop near Haarlem in the Netherlands. All were devoted Christians, known in their city for helping anyone in need.

But in 1940, Europe was ablaze with war. Boots were marching; fear was rising. Hitler’s henchmen swept into Corrie’s country with their tanks and guns, and the Dutch quickly surrendered. As soon as the German military took power, they began their persecution of the nation’s Jews. At first, the Nazi measures weren’t as harsh as they would become over the next couple of years. The noose tightened slowly.

One night in May 1942, a woman knocked at the ten Booms’ door. A Jew whose husband had been arrested, the stranger asked for shelter. “In this household, God’s people are always welcome,” said Casper ten Boom, Corrie’s father.

The visitor changed everything for the family. The family soon joined an underground movement that was hiding Jews and arranging their escape from Nazi-occupied territory.

In case the Germans discovered what was happening in the ten Boom home, an emergency hiding place for Jews was needed. A false wall was built in Corrie’s top floor bedroom to create a secret room where visitors could hide.

For almost two years, the plan worked. There were usually six or seven people taking refuge in the house on any given day, and the ten Booms hid an estimated 800 Jews, saving their lives.

But in February 1944, an informer betrayed the ten Booms. Most of the family was arrested. Casper lasted only 10 days in prison before he died. Corrie and her sister, Betsie, were eventually sent to Ravensbruck Concentration Camp, located near Berlin, Germany.

Similar to what the apostles did when they were imprisoned, the sisters began witnessing about Christ to the other inmates. Many came to the Lord. But the harsh prison conditions were too much for Betsie. She struggled with her health and died there.

Though imprisonment had been difficult, Corrie lived through it and then saw doors for evangelism open for her worldwide. People were drawn to her story and her sincere love for Jesus. Over the next 33 years, she visited more than 60 countries and led countless numbers to salvation.

Her autobiography, The Hiding Place, was an international bestseller in the 1970s and was made into the most popular film ever released by Billy Graham’s World Wide Pictures. She went on to write many more books, and inspire several biographies.

But what about forgiveness? Until the war, she thought she understood all about it. But God later used her most horrific experiences to reveal profound truths to her about forgiveness. Her greatest lesson came out of the blue one day in 1947 when Corrie was speaking about forgiveness at a church in Germany.

Here, in Corrie’s own words, is how God showed her that “if you do not forgive others their trespasses, neither will your Father forgive your trespasses” Matthew 6:15 ESV.

“When I was in the concentration camp, one of the most terrible things I had to go through was that they stripped us of all our clothes and we had to stand [in front of the Germans]. The first time I had to do this, I said, ‘Betsie, I cannot do this!’ And suddenly, it was if as I saw Jesus at the cross. And the Bible tells us they took His garments and He hanged there naked. And I knew He hanged there for me, for my sins! In my suffering, I understood a fraction of the suffering of Jesus Christ and it made me so thankful that I could bear my suffering. Love so amazing, so divine! It demands my life, my soul, my all.

“It was some time ago that I was in Berlin. There came a man to me and said, ‘Ah, Miss ten Boom, I am glad to see you. Don’t you know me?” Suddenly I saw that man. He was one of the most cruel overseers—guards—in the concentration camp. And that man said, ‘I am now Christian, I found the Lord Jesus. I read my Bible, and I know that there is forgiveness for all the sins of the whole world. Also for my sins. I have forgiveness for the cruelties I have done … I have asked God’s grace for an opportunity that I could ask one of my very victims forgiveness. Fraulein ten Boom—once and you’re forgiven. Will you forgive me?’

“I could not. I remembered the suffering of my dying sister through him. But when I saw that I could not forgive, I knew that I myself had no forgiveness! Do you know what Jesus said about that? ‘When you do not forgive those who have sinned against you, My Heavenly Father will not forgive you your sins.’

“I knew. Oh, I am not ready for Jesus to come real quick because I have no forgiveness for my sins. I was not able. I could not. I could only hate him.

“That same moment, I was free and I could say, ‘Brother, give me your hand,’ and I shook hands with him. And it was as if I felt God’s love stream through my arms! You’ve never touched the ocean of God’s love as when you forgive your enemies! Can you forgive? No? I can’t either. But He can!"

The Lord continued to teach her after the incident with the guard. She continued as a student of suffering as she gathered food and found shelter for many needy in her own country in 1945. Then in 1946, she traveled to Germany to assist with massive numbers of refugees and hurting people who wandered the devastated cities of the once powerful country.

In 1949, Corrie began working with a group that wanted to set up a refugee center for displaced persons and ex-prisoners. The only buildings they could find that would do the job were at an abandoned concentration camp.

Though reluctant to go through such gates again, Corrie understood the practical need and consented to help. On her first visit to the property, she walked through the buildings, pointing out what was to be cleaned and what needed to be pitched. She instructed that flower boxes be built and placed in every window. She also ordered paint.

“Green, and lots of it,” Corrie said. “Green like spring!"